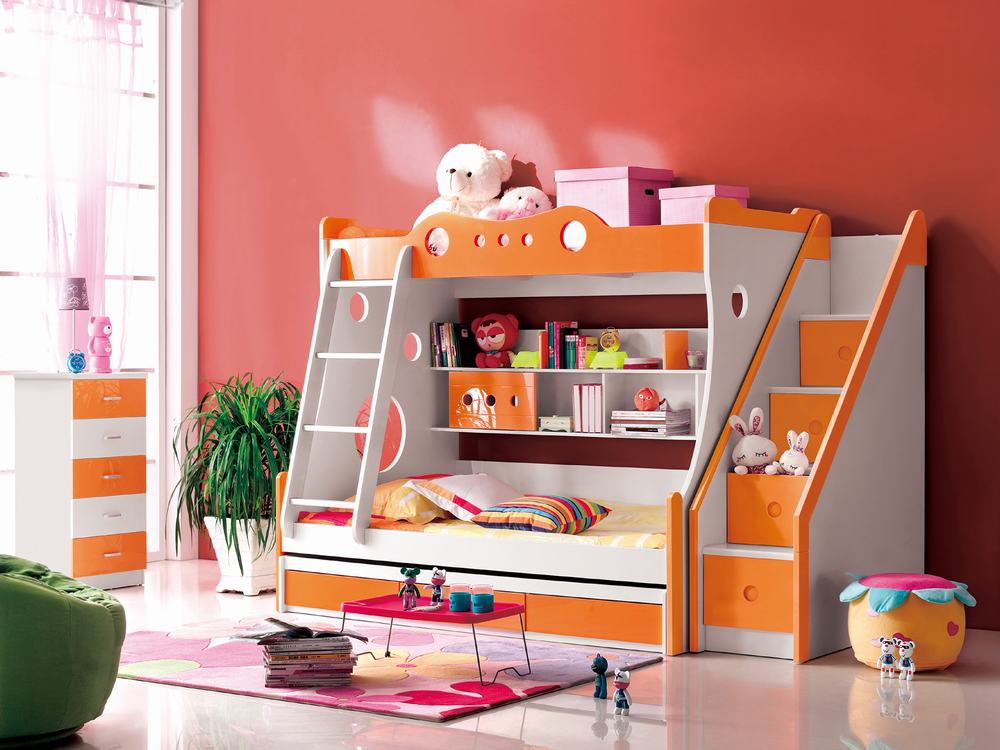 There can be nothing more beautiful than the sight of your children playing together, especially if you have given birth to twins. They eat together, sit together, sing together and stay bonded ‘til the time their lives are separated in adulthood. Although it is good and a feeling of being doubly blessed to have twins; the only problem that comes in your life if to make them sleep, especially if you do not own a very luxurious and huge house. Twins require everything double – two similar toys,

two similar clothes, two similar bed sheets and even two similar beds. And it is very important to think while buying Furniture for children’s playrooms as you have to buy soft furniture so that when children’s are playing they did not give any wound to children’s.However, playing two beds together in the same room can be a little difficult at times. Therefore, people have adopted the concept of bunk beds, which have been available in the market from a long period of time.

Meaning of a bunk bed:

A bunk bed is nothing but a bed in which a single bed frame is placed above the other one. In simple words, it is two beds placed one above the other so that two people can sleep in the same space occupied in the house by the bed. This sort of bed is especially found in the houses of those who have twins or have limited space in the house to have the spaces occupied by beds. This is also observed in summer camp cabins, prison cells or even the hostels where a lot of individuals need to have the right space to sleep. Such a bed is generally supported by four pillars or poles, which is present at each corner of the bed. There is a ladder attached from lower bed to the upper one, using which the individual sleeping above can easily climb. There is also a railing attached on the upper bed in order to prevent the sleeper from falling down. There are a lot of bunk beds that have privacy curtains, which can be used especially if little girls are sleeping in the beds. Parents prefer their six years and older children to sleep in bunk beds due to the height. It is not advisable for younger children or little kids to sleep in such beds.

Who uses a bunk bed:

A bunk bed is used by people who have more number of children at home. It is also used by those who have children visiting their homes a lot of times. For an instance, if someone is an uncle to 3 to 4 kids who keep on coming for night stays, he may have bunk beds to give them proper places to sleep. Apart from this, hostel is one of those places where bunk beds are observed the most. Here, a lot of people come and stay and thus it is not possible for them to have their individual personal beds, due to lack of spaces.

Peter Richie completed his Master’s in marketing last year and since then he has been scribbling all his knowledge related to different fields on the internet. He has mentioned how he slept in bunk beds when he stayed at the hostel and has shared his wonderful experiences about the same with the readers in several articles.

I’m a recovering addict turned stay-at-home mom. The worst kind too. One of those freaks that breastfeeds toddlers, thinks cloth diapers rocks, and gives birth in her bathroom on purpose. I know, crazy leap there. But I promise I’m not all bad! I’m a feminist, progressive, liberal woman. I curse like a sailor and love a good Rum and Coke. I totally…